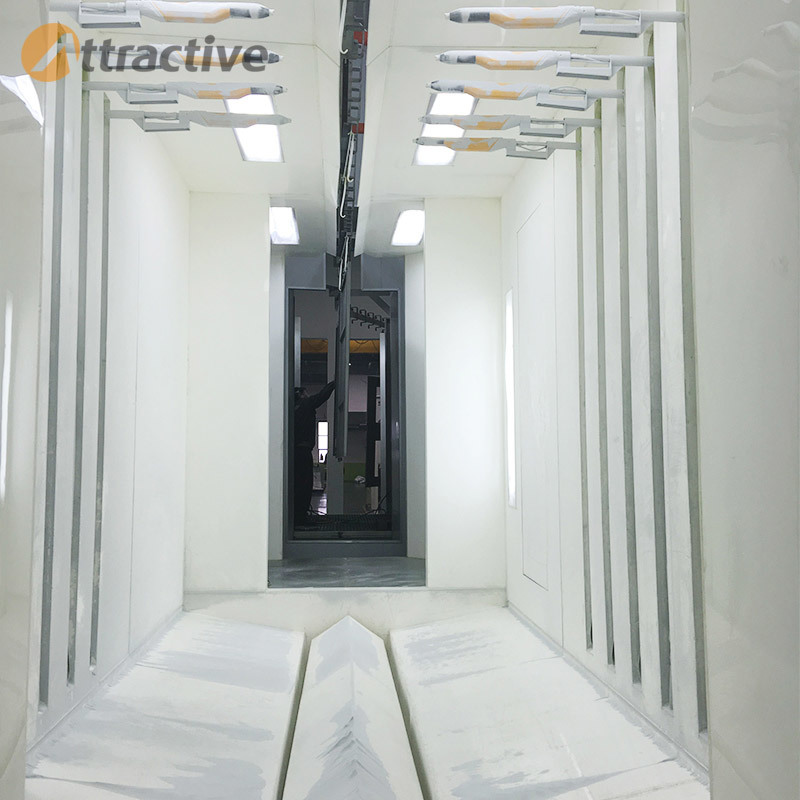 When the spraying robot is working, the spray gun, spray plate, and spray cup for electrostatic spraying, the paint particles are connected to the negative pole, and the workpiece is connected to the positive pole and grounded. An electrostatic field is formed between them. The manufacturer of the automatic robotic electrostatic spraying line tells you that the electric field force on the paint particles is proportional to the voltage of the electrostatic field and the charge of the paint particles, and inversely proportional to the distance between the spray gun and the workpiece. When the voltage is high enough, near the end of the spray gun The air ionization area is formed in the area, and the air is violently ionized and heated, so that a dark red halo is formed around the sharp edge of the spray gun end or the pole needle, which can be clearly seen in the dark. At this time, the air produces a strong corona discharge.
Most of the film-formers in the coatings of automatic robotic electrostatic spraying line, such as resins and pigments, are composed of high-molecular organic compounds, and most of them are conductive dielectrics. In addition to film-formers, solvent-based coatings also have organic solvents, co-solvents, and curing agents. , electrostatic thinner, and other various additives and other substances. Except for benzene, xylene, solvent gasoline, etc., this kind of solvent substances are mostly polar substances with low resistivity and certain conductivity, which can improve the charging performance of coatings.
The molecular structure of electrolytes can be divided into two types: polar molecules and non-polar molecules. The electrolyte composed of polar molecules shows electrical properties when subjected to an external electric field; the electrolyte composed of non-polar molecules is better outside.
The paint is atomized by the nozzle and sprayed out. The atomized paint particles pass through the pole needle of the muzzle or the edge of the spray plate and the spray cup, and are charged due to contact. When passing through the gas ionization area generated by corona discharge, they will increasing its surface charge density at a time. The manufacturer of the automatic robotic electrostatic spraying line tells you that under the action of the electrostatic field of these negatively charged paint particles, they move to the surface of the polarized workpiece and are deposited on the surface of the workpiece to form a uniform coating film.